As we know, television has always predicted the future. “It’s Always Sunny in Philadelphia” is yet another prime example through their satirical social commentary displayed years ago on how the present world is reflected in this very moment in history. The COVID-19 quarantine shows five excellent examples of how people are reacting and dealing with the chaos that is ensuing in society. 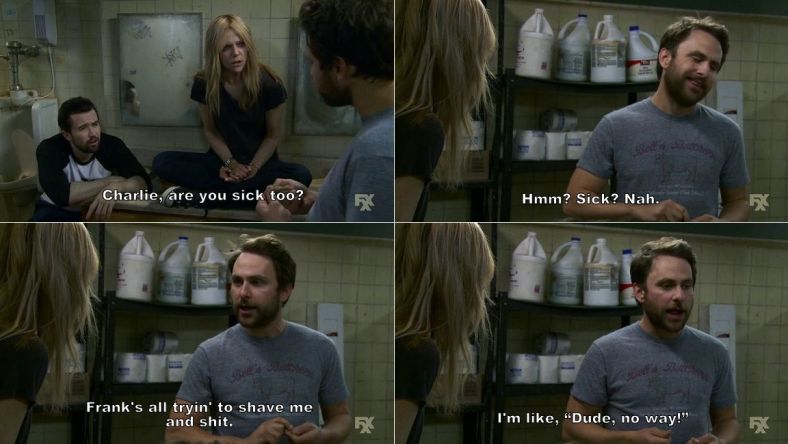 You can watch this episode if you’d like. For the one or two people reading this, it is on season nine, episode seven.

In their predicament during the episode, they touch on many issues such as isolation, stocking supplies, social distancing, quarantining, alcoholism, and how being around the same people can create madness. Each of the five characters represents how different people are handling a pandemic.

Paranoia and control are what Frank represents. He goes to extreme measures to boss everyone around by creating rules. Frank is obsessed with disinfecting everything and staying as careful as possible. Frank spends his time worrying, going into survival mode, only thinking of his safety, and regularly paying attention to the news. To make matters more extreme, he tries to get everyone in the same mindset as him driving everyone insane.

Dennis represents someone who ignores the outside world by putting all of his energy into one activity, which would be perfecting an acapella cover of Boyz II Men. He dictates the situation by being the orchestrator of one of their songs for the gang to win a contest. His fascist ways, once again, drive people insane. People do this to make the time go by faster. It is productive and fulfilling, but it can lead to insanity as well, and watching Dennis go through this is quite entertaining.

“Not giving a shit” is what Dee does in this scenario. She doesn’t care about the quarantine, ordering pizza and hiding it from the gang.
People in today’s situation continue to order takeout, sneak over to Game Stop or the liquor store, and find ways to leave the house to do things like purchase frosting for cupcakes, just like Dee.

Multidimensionally, Mac and Charlie are intertwined with different representations of our situation: consumeristic hoarding panic, social distancing (wearing hazmat suits), deceitfulness, not following the rules, and alcoholism. You can split up their representations in either way depending on how you view their character motifs in this episode.

What we are all going through can be found in these characters. There is nothing wrong with any of these ways to cope, but we cannot be extreme. “The Gang Gets Quarantined” is one of the most accurate satirical representations of how we, as a society, are handling our government lockdown.

It is essential to watch this episode at some point because it is a reflection of who we are as a human race right now. I can understand and empathize with the way we are acting. Most importantly, I realized that life could only be learned by moving backward to move forward, as I saw their characters mirror what our world is going through. As I’ve written many times before, life is always two steps back and one step ahead. But, we are still moving forward.

I don’t know about you, but I’m going to keep putting one foot in front of the other.

If you want to support my writing to create more content, you can make a donation to my Venmo.