The Vikings lost to the Buffalo Bills. There isn’t anything to discuss. But, as much as I love the Vikings, the National Football League is rigged to make significant money, increase ratings, and gather more interest. It is all fixed, trust me, and believe me. The worst part is, the Vikings are always a team where the NFL fixes against.

The NFL wants all of the first round QB rookies to start this year. When a rookie starts and does well, the NFL rakes in the moolah. 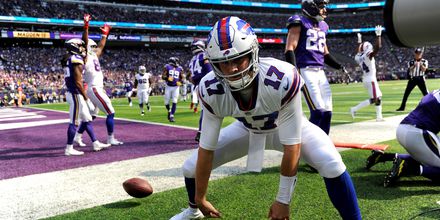 Josh Allen made our defense look like a rookie defense.

Here is a quick rundown of the proof. Sam Darnold starts right away for the Jets. Patrick Mahomes of the Chiefs makes grown men look like toddlers. Baker Mayfield comes in and leads the Browns to victory on Thursday Night Football, to make a grand narrative, against Sam Darnold and the Jets. Tyrod Taylor wasn’t hurt. It was all fixed so that the NFL could have that narrative. Now Baker “Money Maker” is named the starter for Cleveland. We also have Lamar Jackson giving Joe Flacco a run for his money. When was the last time that we saw Flacco play this well? He was in auto-pilot for the previous three years. Oh, and yes. Josh Rosen is starting over Sam Bradford in Arizona. What else happened in the last ten days of the football season? Well, the NFL went out and fixed another narrative, and it had to be against the Vikings once again.

What was that narrative?

Buffalo Bills quarterback, Josh Allen, made the Minnesota Vikings look like the Bad News Bears. Yes, he made the Vikes look so bad that it seemed the Vikings weren’t even playing the right sport last Sunday.

How often does Anthony Barr look foolish out on the field?

Imagine the sound of me crumpling up a piece of paper and throwing it away.

On to LA to face another young star quarterback, Jared Goff.

It is time for Thursday Night Football. A night in the City of Angels, where our “Mighty” Vikings will take on the Hollywood Rams, an A-list roster filled with stars.

The Vikings have a significant weight on their shoulders. With Philadelphia coming up the following week, we cannot afford to lose this game against LA. With that, anything can happen on short weeks when it comes to TNF. It will be a spooky night in Tinseltown.

Don’t count the Vikings out yet, because here are my thoughts on what needs to happen for the Vikes to win.

Throw, Kirk, throw. Catch that ball, Adam! Score that touchdown, Dalvin. No, it more should go like: “BLOCK FOR THE QUARTERBACK – MAKE HOLES FOR THE RUNNING BACK!”.

If we want to talk Super Bowl or even a win against The Hollywood Rams, the offensive line has to start looking more like, well, a line.

Dalvin, you need to cook something up. If we don’t rush for a total of 200 yards on the ground against the Rams, well then we won’t have a chance to win. Dalvin Cook and Latavius Murray will be the offense’s key to winning the Super Bowl. If they can rush for 200 yards a game, then we will win every game, despite having a mediocre line.

Oh, and dont’chya know. Everson Griffen is having some off-field issues, and he probably won’t play. Our defensive line looked atrocious without him, and it seems like he won’t be playing anytime soon. So Danielle, you better make that money. It’s your time to shine, baby.

Overall, the key to this game defensively is to have our corners and safety’s shut down LA’s pass game. Even without Griffen, I’d still take our chances facing Todd Gurley head-on. It is a big game for Dalvin Cook. The running back is making his TNF debut in Hollywood with an opportunity to show up Todd Gurley. If he does so, he will make a name for himself on a big stage. This would put the Vikes back on the map.

Wouldn’t that be a fantastical Hollywood Blockbuster narrative?