It’s not fair that Aaron Rodgers plays for the Packers, a team I have despised since I was a young lad. Couldn’t he play in the AFC for the Buffalo Bills? Why can’t we have him on our team? Oh, wait. We now have a great QB, and his name is Kirk Cousins. Our Messiah.

Cousins is only getting started.

Here are my thoughts about the Vikings border battle tie with the Packers. 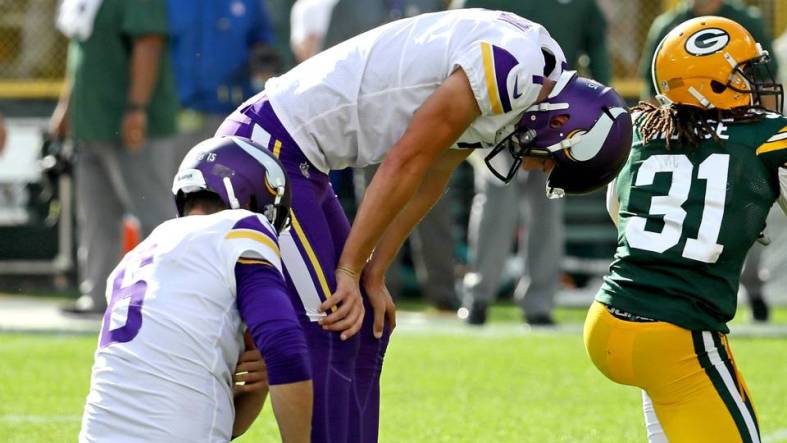 A prior predictions pre-season of mine was Daniel Carlson, our newly drafted kicker, was going to be a bust. I knew this because I didn’t think a 20 some year old kid was going to be able to withstand the animosities of NFL game pressure to kick ourselves to the Super Bowl with four seconds left. Maybe this tie was a blessing for us to find the missing piece to the puzzle, which is now Dan Bailey. Gary Anderson started our lack of confidence in our kicking game in 1998, and hopefully, Dan Bailey will be the answer to this kicking curse that we have along with Kirk Cousins being the solution to our historical quarterback carousel.

Lambeau Field is hostile, and Aaron Rodgers is no easy task even with one leg. He could play with a blindfold and still keep his team in the game to win. It doesn’t matter how much better the Vikings are, every game against Green Bay is never a given. Playing The Packers at Lambeau can cause players like Laquon Treadwell, with poor mental toughness, to drop balls and disrupt the team’s momentum on the road.

Why didn’t we draft Michael Thomas?

When I was in high school, we played a hockey team who had always been a state title contender in the middle of the season. They were ranked third in the state, and we were ranked number two. Both of us were bound to play in the State Tournament, and this game was going to affect the seedings. Despite outshooting them 45-20 and outplaying them, we tied. It was the worst feeling ever, just like this Sunday’s loss – I mean tie to the Packers. My coach said he walked by their locker room after the game, saying they were celebrating as if they had won the World Series. With that tied up tang in our mouths, we went out and won every game for the rest of that season and became State Champions. As for the other team, they lost a majority of the rest of their games that year and fizzled away.

The Minnesota Vikings must come out of this tie STRONGER than Green Bay. We have a better team, and we need to stop making tiny mistakes, like getting our punts blocked.

We need to blow these guys out as soon as possible. Then we can give our starters rest before we play The Los Angeles Rams on the road on Thursday Night Football, a team that we can beat because anything can happen on Thursday. Seriously, we need to go 3-0-1 to start the year if we are going to avenge that tie.

Could Cousins be our savior after 30 plus years of different quarterbacks?

Wouldn’t that send the league a message, now?

The Vikings need to play other receivers against the Bills because we need to figure out who our number three option will be to create a three-headed monster receiving core.

Please spread out the run game between Cook and Murray. Tay Train was a superstar in Oakland, and Cook is playing so tentatively on his ground game. Use one for the air and one for the ground – mix and match, destroy, then repeat.

Last, the defense needs to tighten up tackles, and special teams need to be flawless.

One thought on “Skolz(os): MN vs GB, and Thoughts on Buffalo.”